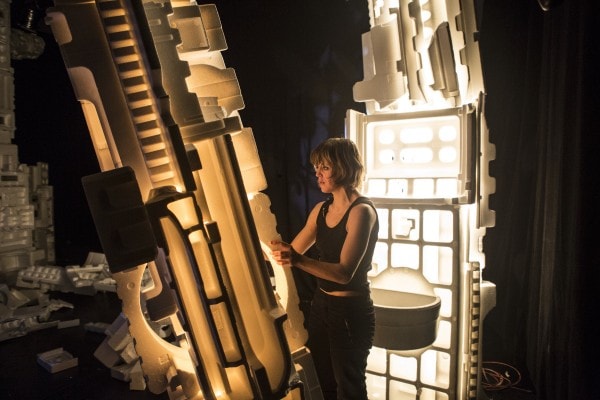 Iver Findlay and Marit Sandsmark have created an installation-dance performance about death that does not go gently into the night. Instead with relentless fury and a sonic battering ram their piece, o’ death, escalates to such a visually dizzying crescendo that the most sensitive among the audience might want to take some Dramamine beforehand. With herky-jerky movement, pulsing light, and an increasingly bombastic soundscape o’ death is as much a physical experience as a theatrical one. But despite the effective deployment of physical queasiness the unflinching endeavor punches hard but does not leave a lasting impression.

Choreographer and performer Sandsmark thrashes around a darkened room among pylons of sculpted Styrofoam and twitching tree branches designed by director Findlay. Like a standing stone circle erected from packaging detritus these white, glowing beacons, illuminated from within, hum and flicker. Oddly familiar and foreign they are beautiful, powerful totems in this hostile landscape.

As you enter the theater in darkness and find your way to foam seats, Sandsmark moves with violent jags in and around this space. She cries into the void but what she is saying remains unknown. A Styrofoam hut which could be a place of refuge, meets its own demise during one of Sandsmark’s flailing outbursts.

But who is creating this discomforting environment? In this swirling storm of noise and light one wonders if Sandsmark is the master or the servant. Is this a result of humans or nature or human’s impact on nature? The mix of materials, Styrofoam and leaves, suggests a bit of both. At times Sandsmark seems propelled by beams of light that pierce the darkness and illuminate her limbs. In other moments she is behind the frenzy or destruction.

At one point Sandsmark rhythmically thumps one pylon until the resultant echoing screech continues to reverberate well past the point she stops touching it. The room crackles and shakes with this impending sound storm. As the sonorous booms increase it feels as if some destructive and giant force is wending its way towards us. It’s a sickening sound and when met with the burning, flashing of the lights the overall effect is nauseating. Even with my eyes closed I could not keep out the bright, harsh light.

Theater can be uncomfortable and even inhospitable, and still be meaningful. But here the discomfort, though impressive, fails to create anything more than that. The visual design is intriguing but the endless sonic battering never quite develops power or significance. The Norwegian originated work is meant to build off of 1920’s African-American gospel preacher and singer J.M Gates’s song, “O Death, Where Is Thy Sting?” Near the end of the show, we hear gospel singing. This shift to the spiritual after so much of the corporeal may be an opportunity to contemplate the afterlife once death has taken you. But this very period specific music being injected into what has heretofore been a bleak Blade Runner like space is curious. Though gospel music arguably conjures a church-like serenity, it feels uncomfortably culturally denuded in this usage. After such an onslaught this peaceful break may be welcome but it does not provide impact beyond a sign that maybe this cacophonous piece is mercifully coming to an end.

Nicole Serratore writes about theater for Variety, The Stage, American Theatre magazine, and TDF Stages. She previously wrote for the Village Voice and Flavorpill. She was a co-host and co-producer of the Maxamoo theater podcast. She is a member of the Drama Desk and Outer Critics Circle.