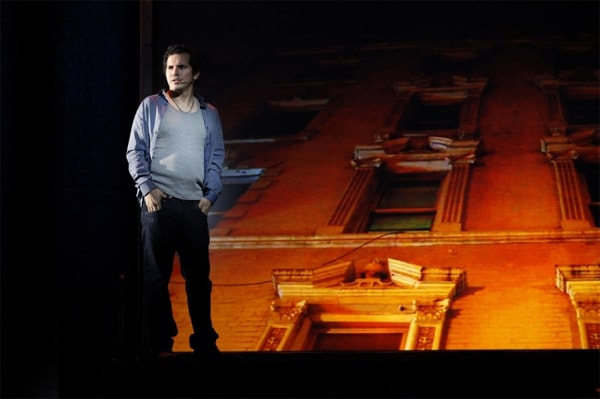 John Leguizamo seems set on making a career out of his Broadway comedy confessionals. In the latest installment of the Emmy award winning actor’s on-stage autobiography, Ghetto Klown, now playing at the Lyceum Theatre, he tells the audience that his one-man shows are what have saved him from himself. But it’s the hilarious, physically vibrant way he tells his story that makes this show a virtuoso tell-all and I mean all.

John Leguizamo wants to tell you everything and make you laugh till you cry while he does it. It’s all reinforced by an ever-changing backdrop of visual aids on a billboard-like screen like a giant show-and-tell. Don’t miss his interpretation of the New York subway map. I won’t spoil the gag but it will change your commute forever.

On a set, which resembles perhaps a back alley behind a Broadway theatre, Leguizamo dances, jumps and grinds through the landmarks of his life. It’s a classic American dream story, the Latino teenager from Queens who scales the heights of Hollywood and Broadway. But while he is alone on stage, he plays a huge cast of supporting characters. His impressions of people from Al Pacino to his grandfather reveal him as an astonishing impersonator.

Perhaps his years studying with method-acting guru Lee Strasberg have paid off.  He tells the audience, he struggled in Strasberg’s classes because he was the only student who couldn’t conjure real tears when he acted the moment his dog died. Strasberg tells him to be the dog – “So I bit him,” says Leguizamo. Ghetto Klown is full of such moments – puncturing the seriousness of any story with a sidesplitting anecdote.

Leguizamo has already bared much of his soul on and off Broadway in his four previous one-man shows starting with Mambo Mouth in 1991. Many in the audience on a recent Saturday were clearly familiar with his plays and cheered the mention of each. This was not your usual Broadway crowd as many were not white and not aged over fifty. For that alone, Leguizamo deserves kudos at a time when theatre audiences are in danger of dying out.

Many were also Spanish-speaking, perhaps an advantage as Leguizamo sprinkles his monologue with a generous dose of jokes in Spanish, frequently drawing on his Puerto-Rican-Colombian family for material. For the most part, body language and some subtitles on the screen fill in the gaps for the gringos. But Leguizamo also has an axe to grind. “Learn Spanish,” he challenged the audience. “Call your bank, press two”. It was the joke that got the loudest cheer of the evening.

The typecasting of Latino actors is a recurring theme in Ghetto Klown and inspires Leguizamo to improvise lines when he’s acting against Hollywood’s big-name actors. As he tells it, this usually doesn’t go down too well with the likes of Kurt Russell and Steven Seagall, both of whom he brilliantly impersonates. To his delight, however, his off-the cuff rewrites often make the final cut of the movie.

It is his own way with words that he credits as being his salvation, and never have debilitating bouts of depression seemed so funny. Leguizamo uses a recurring montage of photos on his big screen to illustrate how he deals with what he calls his “internal jihad”. The only way he can combat each episode of depression is to write and the result is his series of one-man plays.

Ghetto Klown is a hugely entertaining exercise in self-revelation, where every poignant moment is punctuated by a laugh out loud joke. And that subway map, you’ll snicker every time you see it hereafter.

Juliet Hindell first went to the theatre to see “A Midsummer Night’s Dream” when she was four. She’s calculated that she has since seen that play more than 2 dozen times, once in Japanese. A Brit, Juliet has made her home in London, Paris, Washington D.C., Tokyo, Hong Kong, Charlotte NC and now New York. A journalist, Juliet wavers between new writing and musicals as her favorite forms of theatre, and of course Shakespeare.