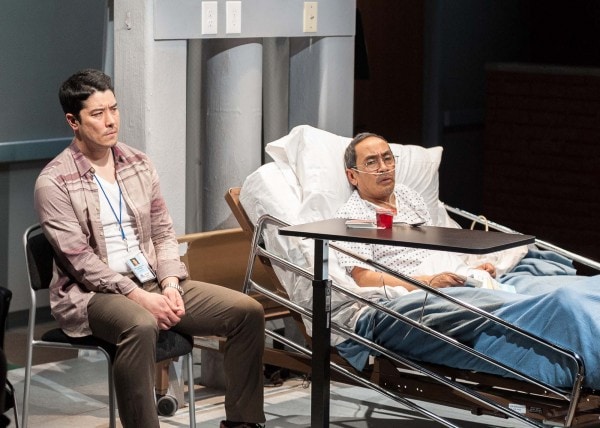 Finding your path in adulthood either alongside your sibling or in conflict with them drives much of A. Rey Pamatmat’s new play House Rules. With a light hand on some heavy issues, Pamatmat digs into sex, sexuality, assimilation, and even abuse, seen through the eyes of two sets of siblings. Despite the serious subject matter, he makes these vibrant characters often a joy to watch. Nearer the end, the play meanders and speechifies a bit, but for the most part it’s a funny and moving journey.

Just when things seemed to be going well for Rod (James Yaegashi) and his boyfriend Henry (Conrad Schott), Rod finds out his father Ernie (Jojo Gonzalez) has had a heart attack. Rod rushes into savior mode as he’s a doctor at the hospital where Ernie has been taken. Rod’s younger brother JJ (Jeffrey Omura) flies back home upon hearing the news. But it’s not just these men who are affected. Downstairs, their childhood neighbors Momo (Tiffany Villarin) and Twee (Tina Chilip) start to worry about what might become of their aging mother Vera (Mia Katigbak) when they hear the news about Ernie. These two sets of Filipino-American siblings, who’ve practically grown up together, must address what their relationships will be with each other as they confront their parents’ mortality.

Pamatmat avoids cute, neat categorization for these complex characters. The parental love here is messy at best. The parents all came over from the Philippines but the lives they offered their children in America have varied. The result is mostly assimilated kids now in adulthood who are full of carefully-observed contradictions. Momo is the doting, obedient daughter following her mother’s footsteps into medicine, but she struggles to stand on her own or admit to anyone who she is dating. Twee is artistic, wild, and emotionally independent – saying what she wants, when she wants. She’s steering her own course until she ends up broke, again, and back in her childhood bedroom. Rod has always tried to be the good son and his abusive father has only ever criticized him for it. Rather Ernie dotes on JJ who has always opted for the path of least resistance and has gone off to LA to become a famous comic book artist.

The sisters end up with the most contentious relationship. Their volatility results in objects and insults frequently hurled across the room. With this kind of sibling blood-sport, we get to revel in the epic barbs and deep-seated animosity, which creates much of the onstage comedy as well as a healthy helping of the drama. Perhaps they are simply more direct with their conflict, whereas the brothers seem to talk around their issues.

House Rules doesn’t reinvent the family play but it’s nice to see that the primary gaze is on sibling relationships. Spending years fighting each other, teasing each other, and existing in what feels like a permanent dynamic, the play hones in on this very precise time when siblings confront the reality of being left alone with each other. When there is no parent to mediate or define the family structure, who will they be to each other?

Pamatmat has dealt with critics unfairly inserting questions of identity politics in his work. Here Pamatmat allows the characters’ Filipino-American identity to be both a feature of the storytelling but not the central issue addressed. It informs, particularly, the sisters’ idea of family, though it does not weigh on the brothers in the same way. This in and of itself is a reflection of the parents who have raised them. And there was certainly a moment where Ernie is in the hospital shouting to be shot in the face that made me think of my cantankerous Italian grandfather in a similar situation. So it’s not hard to see flickers of your own family here.

Ultimately Momo, Twee, and Vera function as the heart of the piece, even if it’s Ernie’s heart attack that launches the story. Director Ralph B. Peña keeps the cross-cut action hopping as characters move from homes to hospital to restaurants. But Peña stages Vera’s living room at the center of the overlapping space. Rod’s apartment and the hospital are all visible all of the time but the place that brings everyone together, both the men and the women, is Vera’s. The play is structured to move between the families and their moments of intersection (for instance Momo and Rod work together at the hospital) equally. But we get the strongest emotional punch from the women.

Of course, stage veteran Katigbak’s performance as the matriarch helps create this solid center. Katigbak ignites a warmth on stage that draws us all in. Between that and the overt push and pull of Momo and Twee, we get more invested in that family than with Ernie, Rod, and JJ.

Some of this is owed to the male characters working through their problems in less revealing ways. Rod often struggles to articulate what is really going on with him and is prone to loud, explosive outbursts. But it’s a challenge to see the nuances in this character when Yaegashi seems to play each outburst at the same level so there’s nowhere else to go. But even with a character like JJ who is more willing to voice his inner thoughts, we never quite see the fervent inflection to his struggles in Omura’s performance. We don’t need more backstory on these men but we do need a touch more emotional shading from the performances to give all the characters their due.

House Rules is on until 16th April 2016 at HERE Arts Center. Click here for tickets.

Nicole Serratore writes about theater for Variety, The Stage, American Theatre magazine, and TDF Stages. She previously wrote for the Village Voice and Flavorpill. She was a co-host and co-producer of the Maxamoo theater podcast. She is a member of the Drama Desk and Outer Critics Circle.

Directed by Ralph B. Peña

Written by A. Rey Pamatmat