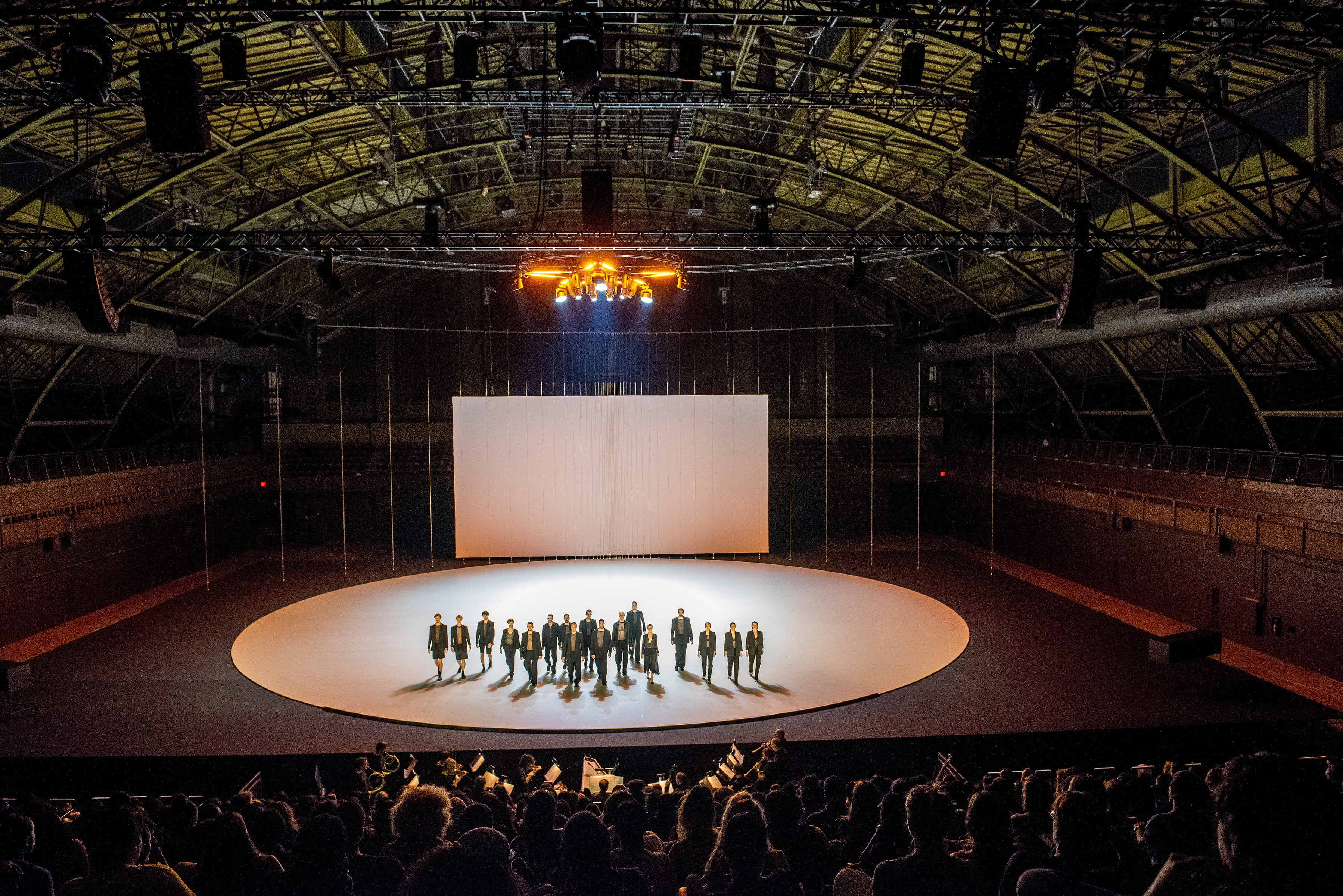 In the first of Bach’s six Brandenburg concertos as choreographed by Anne Teresa De Keersmaeker, sixteen dancers from her Brussels-based company, Rosas, walk back and forth in time to the bass line. They are presenting themselves to the audience and expressing their own individuality: their distinct physical attributes, the way their faces rest, the way their feet hit the ground, arms swing, and knees bend. They’re also showing their connection to the fifteen other dancers as the group moves in a mutating mass, wiping and refreshing the stage space as they march downstage and retreat back. The neutral/blank facial expressions wavered only occasionally, later in the performance, when a dancer completed a particularly difficult maneuver and looked over to share a smile with a colleague.

De Keersmaeker lets Bach dictate the rhythm and motivation behind the choreography. Some modern dance seeks to subvert the dominant rhythmic motif of its music and establish a new vocabulary in juxtaposition. De Keersmaeker instead plunges her dancers into Bach’s orchestration. In the fifth concerto, as Bach strips the music down to harpsichord, violin, and flute solos, so, too, does De Keersmaeker clear the stage of all but three dancers. As the instruments play with and against each other, the trio of dancers enliven them, bringing a physical expression to the harpsichord’s purr, the violin’s scratch, and the flute’s whistle.

The music is performed by the B’Rock Orchestra, a Belgian Baroque ensemble, in their North American debut. The addition of live music to the choreography is invaluable. Under the baton of Amandine Beyer, B’Rock brings an aural lushness to Bach’s concertos. Even when the piece is familiar (the first concerto in particular), there is a vibrancy to the playing and conducting that makes these nearly three-hundred-year-old compositions shimmer. De Keersmaeker has some of the concerto movements begin with a leap from a dancer and the conductor’s downbeat as the dancer reaches their apex. It’s a gleefully subversive gesture as the typical idea would have the baton come down as the dancer descends.

The concertos are divided with moments of silence in which the dancers leave the stage and members of B’Rock shuffle into or out of the pit as dictated by the following concerto’s orchestration. The principal company wears chic mesh formal wear designed by An D’Huys, but in these interstitial moments, a man in a track jacket and t-shirt strides center stage with a handheld placard that evokes both a picket and street sign. He stands in a pool of light and turns it around to reveal the number and title of the following concerto. These moments of alienation serve to mark the piece’s progress, but later, De Keersmaeker adds in ghostly gesturing from the dancers in this silence, as if their work has not been completed just because the music has stopped. The effect is riveting.

The scenography and lighting by Jan Versweyveld consists of a bold white circle lit by chilly streams of white light when the dancers are in motion and other-worldly yellow between the concertos. De Keersmaeker begins the evening with the dancers on a strict grid that is at odds with the curve of Versweyveld’s circle, but as the music progresses and they move into later concertos, the size and scope of the circle within the massive Park Avenue Armory becomes an arc around which the dancers run, fall, and roll.

Next year, De Keersmaeker will again team with Versweyveld and director Ivo van Hove to provide new choreography for a revival of West Side Story on Broadway. It is a bold, loaded undertaking as the original dances by Jerome Robbins are some of the most iconic in history. De Keersmaeker’s work was new to me when I experienced The Six Brandenburg Concertos last weekend, but if the inventiveness, style, and attention to musical texture are typical of her process, I eagerly await anything she has to present.

Lane Williamson is a theatre writer and editor in New York City.