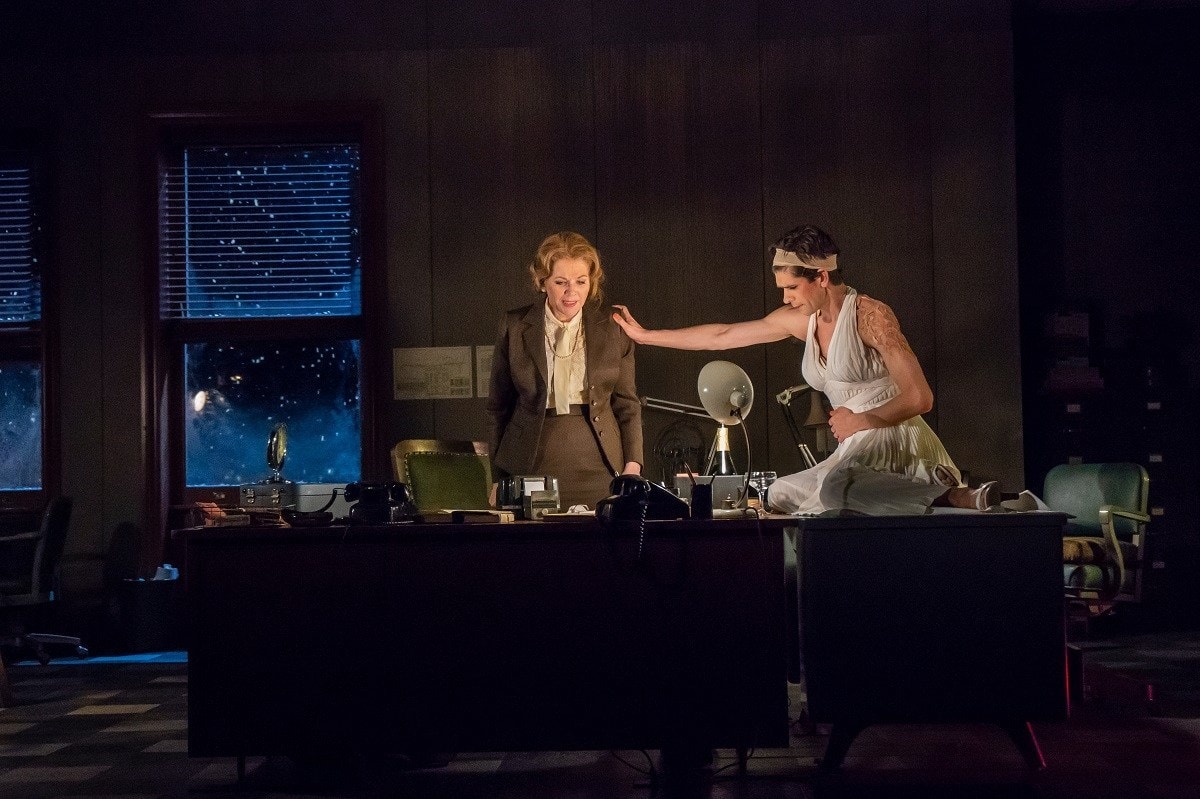 The works of poet and classicist Anne Carson are that of translation. Sometimes literal translation, of course, but also translations of mythologies and meanings and experiences from one context to another. This is the case yet again in her new, commissioned work, Norma Jeane Baker of Troy, now playing at The Shed.

The Shed, a fresh and new, if not a tad aggressively modern, performance space next to the newly opened Hudson Yards, hosts the production in its Griffin Theater, and the venue isn’t just sleek but spacious, with plenty of room for set designer Alex Eales to build out an impressively, meticulously rendered stage. We’re inside an office, and all the familiar accoutrements—desks, tiled ceiling, various papers and office supplies—are there. Throughout the whole play, we can see snow falling outside the window, some of it gathered along the frames, showing just how exacting and realistic the staging is. It’s too bad, then, that the space feels mostly unnecessary to the execution of this production. A play with just two actors, one of whom mostly remains in one spot throughout this production, Norma Jeane Baker doesn’t require or make that much use of the staging. Part of that is direction (by Katie Mitchell) and part of that is Carson’s script itself, which, by its very language and themes and concept, encourages that every element of the production be secondary to the writing.

And, don’t get me wrong, the writing is dazzling, as her work is wont to be. It’s never really easy, though who needs ease when you’ve got her strange, obsessive circuity, her figurative leaps, and her eye-opening moments of poeticism. “Sometimes I think language should cover its own eyes when it speaks,” the play’s characters say in a moment of textual awareness, and, later, a wrenchingly self-destructive line is spoken then repeated: “Once the cutting starts, a wound shines by its own light.”

The play itself is an experimental hybrid of forms, a metatextual take on the writing of a play based on another play within a play. The two characters are nameless, purposefully anonymous, and only exist within the confines of the language Carson has them use. It’s the early hours of New Year’s Day, 1964, and Ben Whishaw is a suited fellow who’s bringing in the new year in a dark, cold office. Renée Fleming soon joins him, but in a strictly professional capacity, as a stenographer, to type up his play, Norma Jeane Baker of Troy, as he dictates it to her. The entirety of the play is a dictation of a play, one that superimposes the story of Norma Jeane Baker (more famously known as Marilyn Monroe) onto Euripides’s Helen. As the play within the play progresses, Whishaw’s character transforms into the very figure he writes about.

Whishaw is engaging to watch as he slowly changes from his suit into Marilyn’s famous white dress over the course of the production, wearing padding to mimic her body shape and donning an increasingly effeminate set of mannerisms and vocal patterns. He brims with frenetic energy throughout, nervous and a little unbound, as Fleming’s character is steady, statuesque at times, a representation of a one-woman Greek chorus and the choral element of the play herself. She sings, at first sparingly, with restraint, but later crescendoes beautifully, and Paul Clark’s score feels appropriately classic, even in its more baroque, melodramatic swells, and, particularly at the show’s climax, when it builds to a charging, operatic bravado.

Norma Jeane Baker is practically plotless, more about the storytelling than anything else, so no part of its progression is surprising. The surprises are in the writing, but the rest is just incidental, vehicles through with the writing can shine. We know nothing of Whishaw’s character beyond what we can infer from his writing of this play. His relationship to Monroe and Helen of Troy, his intention in writing the play, his own possible sexual or gender reckoning—none of that is as important as the play itself. And with Fleming’s character, even less so.

So while Carson’s writing feels innovative and thematically relevant—her study of femininity and female agency, sexuality and ownership, mythology and celebrity, and duplicity and illusion—even when we get to the climax, a sudden, jarring exclamation of sound and lighting and movement that would have been better executed if steadily built toward, it still feels lesser than the language. One gets the sense that there’s a bit more to the characters and the world, despite Carson’s refusal to engage with them beyond their being mouthpieces for her poetic license, and one may imagine a production with direction that’s more taut and active in its relationship to the text. Even so, because Norma Jeane Baker of Troy succeeds on its most fundamental level, and Whishaw and Fleming are good at what they do, witnessing the play is like indulging in some intellectual candy, both deliciously sweet and sour at the same time, the flavor with you even after it’s over.

Maya Phillips is a contributor to Exeunt Magazine

Produced by The Shed