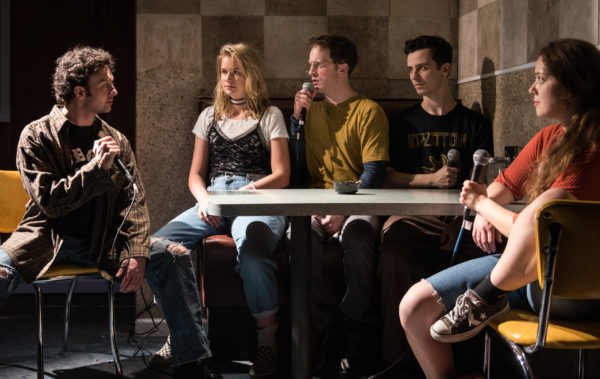 Ken Urban’s Nibbler follows five high school friends at the biggest turning point in their young lives. They have recently graduated and are living under the ticking clock of their final summer before adulthood. The central character, Adam (James Krautz), is adrift; he does not know what his future holds. He is not going to college and he has no job prospects other than pumping gas at a filling station. Around him, his friends are making plans, going to college, and shifting into new, grown-up people before his eyes. If this all sounds like a play you’ve seen before, it is – until Urban introduces the Nibbler, a creature from outer space that sucks on the neck of unsuspecting teenagers, produces orgasms, and then leaves its victims transformed into focused adults only slightly less perfect and robotic than the Stepford Wives.

The Nibbler is a physical manifestation of Adam’s friends’ maturation. Adam is the only one who isn’t Nibbled. After seeing all of his friends altered by this neck-sucker, he willingly offers himself up, wanting the drive and ambition (and probably the orgasm) the Nibbler delivers. Unfortunately for Adam, the Nibbler simply passes him by.

Urban writes of a place and time he knows well. The play is set in New Jersey in 1992, when Urban himself graduated high school. Though the actors are all age-appropriate, the dialogue has the kind of manufactured, stilted feel of someone trying to recreate the slang and colloquialisms of his past. Very little of what the characters say is believable. Writing dialogue for young people as an older person is a tricky thing to accomplish. Even as meticulously constructed as the language in Nibbler is, it feels like scripted dialogue, not like speech.

This is also partly because the actors have no solid connection to what they’re saying. Each actor is given a sketch of a character and has to inhabit this sketch as if he or she is fully realized. Urban has taken time away from developing the characters or establishing conflict and has given it over to the Nibbler, a device that has little bearing on the plot. The characters never fear the Nibbler, they never discuss its repercussions with each other, they never even seem to notice that he’s there, except when he is necking them. There may be an interesting play here somewhere, but the Nibbler is obscuring it from view.

It is a great piece of puppetry, though. Stefano Brancato has crafted a walkable creature that looks made of meat and bone, of intergalactic stardust and meteorites. Manipulated by his victims, the Nibbler moves through the space in a suspended, angular gait in contrast to the teenagers shuffling around him. He has a long, elastic tongue that stretches out from his mouth to attach to the neck of his victim. This level of gruesomeness is so intense it’s what makes his lack of consequence so mystifying; why does no one in the play do anything about it? Because the characters are too happy to let this monster prowl around.

The performances are all adequate. Only Rachel Franco as Tara is truly given the opportunity to play multiple colors. Tara begins a relationship with Officer Dan, a policeman in his late 40s who, in what we can assume is a midlife crisis, is eager to share joints and hook up with a woman less than half his age. Franco handles this tricky plot point with admirable grace. Dan comes on to her out of nowhere, and the following exchange occurs:

Tara: Are you…gonna rape me?

Dan: If I was your age, I would’ve banged you, no problem.

The play’s biggest flaw is that Dan is then, through the rest of the play, allowed to be more than a disgusting older man preying on a young woman. He is even, towards the end, imbued with sympathy. Dan and Tara begin a consensual relationship, but the why behind this is not fully explored. Instead, we are treated (punished?) with a scene in which Dan ejaculates into a condom and then flings it downstage, causing several people in the front row to jump back in their seats. It is hinted, late in the play, that Tara is pursuing this relationship with Dan because he compliments her appearance and makes her feel sexy. It is also hinted that she may have some unresolved and misplaced feelings regarding her father’s death. Neither of these ideas is expanded.

Nibbler, while not uninteresting in concept, left me wondering why the play was written. It did not fully commit to telling the story of the quintet moving towards adulthood or the story of the Nibbler’s arrival in Medford, New Jersey or how these two things are related. If the Nibbler was a manifestation of Adam’s fear of his friendships changing, why isn’t it mentioned? Urban writes with a deep fondness for this time in his life and this is a relatable crux for anyone who has lived in that post-graduation daze. It is unfortunate, then, that the resulting play does not capture that spirit.

Lane Williamson is a theatre writer and editor in New York City.

Produced by The Amoralists