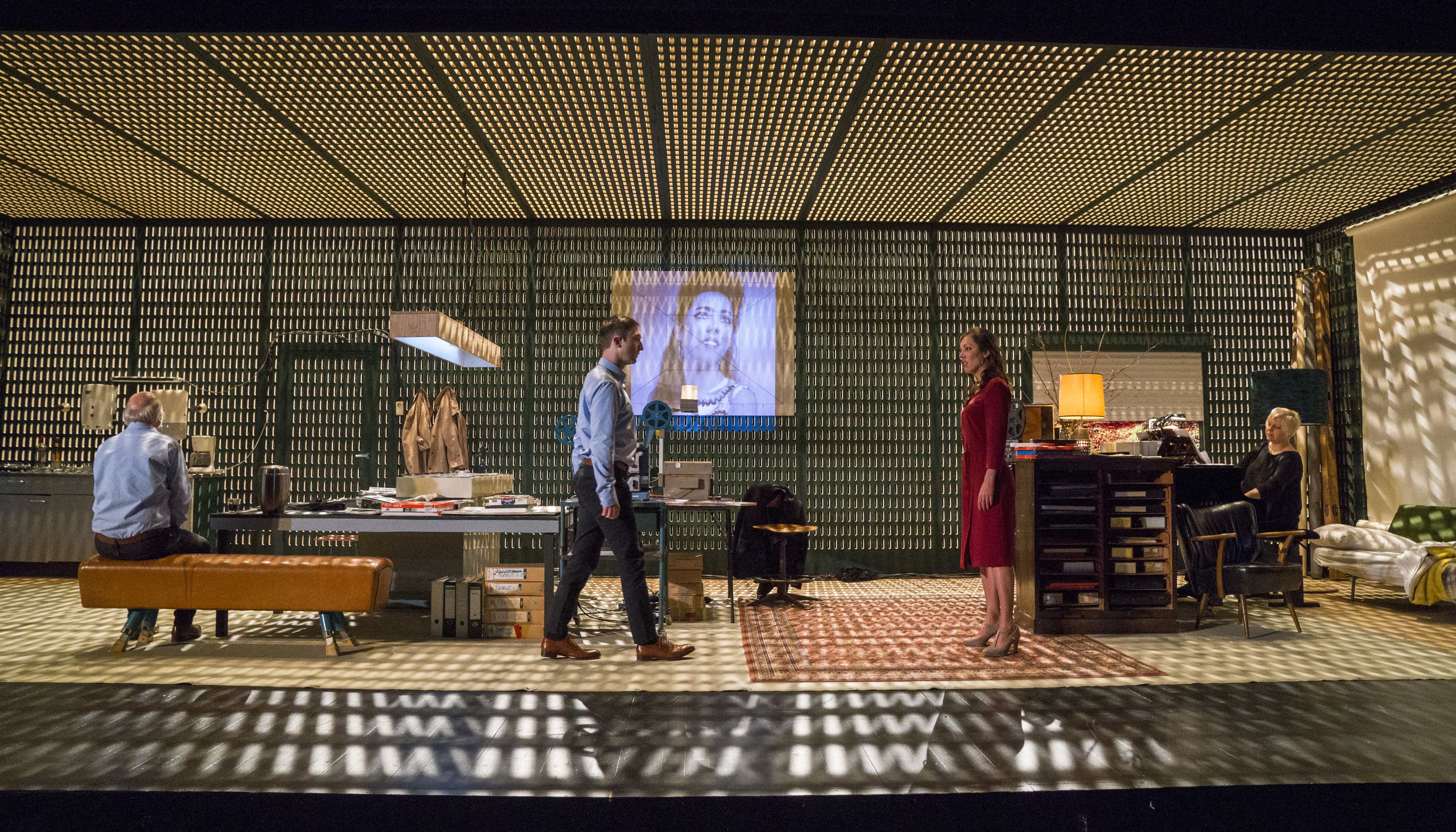 “Diary of One Who Disappeared” at the BAM Howard Gilman Opera House (Photo: Richard Termine)

There’s a heavy dose of melancholia in Ivo van Hove’s staging of Leoš Janáček’s The Diary of One Who Disappeared at the Brooklyn Academy of Music’s Howard Gilman Opera House. The song cycle tells the story of a young village boy who has fallen in love with a gypsy girl. But here the tale is interwoven with details from Janáček’s life – he sustained a decades-long unrequited love for a woman some 40 years his junior and wrote her hundreds of letters. In what may be a bid for relevance, the narrative is also brought into the mid-20thcentury with sometimes confusing results.

Working with his longtime collaborator Jan Versweyveld, the stage of the Opera House is transformed into a low-ceilinged, claustrophobic, photography dark room and study with a piano. The young boy has been reinterpreted as a successful young photographer and his older alter ego who both appear on stage.  The younger self is the tenor Andrew Dickinson while his elder is Wim van der Grijn. Both are dressed in identical shirts, jeans and shoes. But it’s some time before either appears on the stage. For a musical work, there is plenty of silence and time to absorb the atmosphere of longing, both for lost love and youth and innocence.

The mezzo soprano Marie Hamard strides into the dark room and opens the piece with a protracted silence during which she makes coffee. She then plays a recording of a male voice that gives some instructions on the position of the piano. The piano remains stationary so it’s puzzling as to why the instructions are required. It is not until this moment that the pianist, Lada Valešová, makes her entrance. She is the lone musician and gives a moving and subtle performance. Her presence on stage among the vocalists adds to the impression that we are eavesdropping on many layers of memory.

The older photographer arrives next but his musical counterpart sings his first song out of sight. It’s an interesting approach as it suggests the memories filling the older man’s head and it becomes clear that Hamard is both a present-day assistant and the embodiment of the younger man’s love obsession, the gypsy Zefka.

As the songs tell the love story, the perforated backdrop and ceiling suddenly transform from closed dark room to suggest the dappled light of the forest where the lovers meet. As Ivo van Hove so often does, much use is made of projections, here with the help of an old school overhead projector and film projector. This allows us to see Zefka in all her erotic allure. If we have not understood that the photographer is still completely obsessed with her, it is made abundantly clear when her naked torso is projected onto his body so that, visually, they become one.

Additional words and music are provided by dramaturg Krystian Lada and composer Annelies Van Parys that draw on fivepoems written at the same time as Janáček’s songs by Romany women. Janáček’s tireless letter writing is also employed to create a poignant end as the older man burns his correspondence to his dead lover.

While all of this is intriguing and the musical performances are superlative (including the offstage female trio of Raphaële Green, Annelies Van Gramberen, Naomi Beeldens), the lyrics and the setting seem in opposition. “The leaf tells of the young heart that dies quickly”, the young man and Zefka sing while what we see is mid-century modern furniture. There are also some awkward period lyrics describing the gypsy girl as “black” – perhaps a less clumsy translation could have been chosen. Diary of One Who Disappeared is not an easy piece to stage but this production, while flooded with genuine emotion, seems lacking in a cohesive thread to tie this old story to a more contemporary setting.

Juliet Hindell first went to the theatre to see “A Midsummer Night’s Dream” when she was four. She’s calculated that she has since seen that play more than 2 dozen times, once in Japanese. A Brit, Juliet has made her home in London, Paris, Washington D.C., Tokyo, Hong Kong, Charlotte NC and now New York. A journalist, Juliet wavers between new writing and musicals as her favorite forms of theatre, and of course Shakespeare.

Review: Diary of One Who Disappeared at the BAM Howard Gilman Opera House Show Info

Produced by Brooklyn Academy of Music