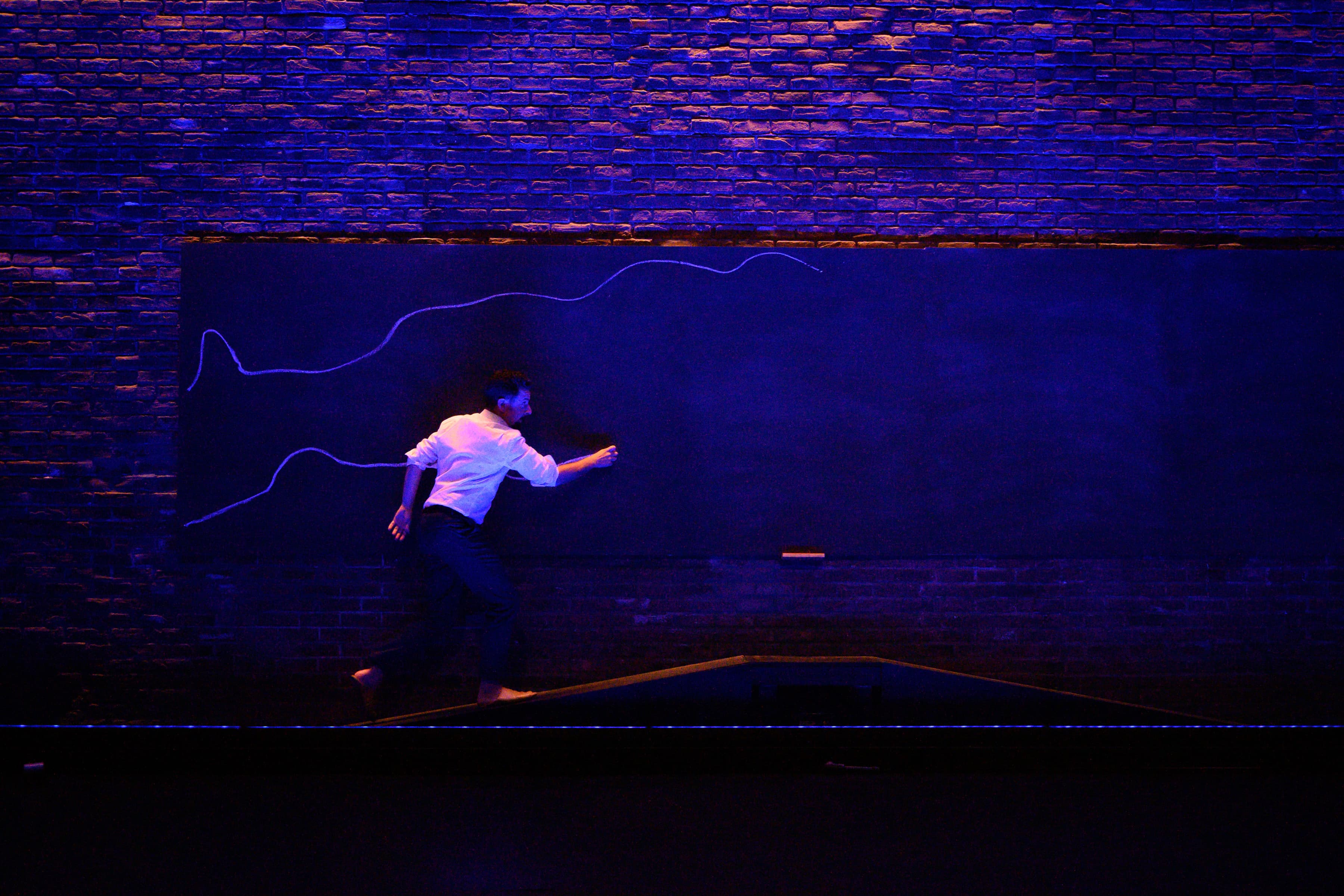 Crossing into another country is never an enjoyable experience. It’s nerve-wracking no matter how many times you travel, because you never know what to expect from the border security. Do they speak your language? What if something goes wrong? Thaddeus Phillips, the playwright and star of 17 Border Crossings, pulled from his own extensive travel experiences and new stories to create a show depicting border crossings by plane, train, ferry and motorcycle, ranging from hilarious to tragic. The viewer visits Serbia, Amsterdam, Singapore, Jordan, Angola, Colombia, and even Newark, New Jersey—to name just a few.

Thaddeus Phillips is the only soul on stage during these 90-minutes that span 20 years, from the early ’90s to the present day. He plays The Passenger along with every border agent and human being The Passenger encounters on his many travels. He’s charismatic, engaging, and switches into any accent and language with relative ease. (Particularly impressive is a jump from French to Portuguese that is executed with precision.) In a memorable scene where he switches between playing an arrogant, swaggering Serbian border police officer, who shows his authority by constantly grabbing his crotch, and the sleepy, nervous Passenger, Phillips got a lot of laughs. This show is an effective vehicle to demonstrate what a talented performer Phillips is.

The sparse stage space gives Phillips a lot of room to move and spark the audience’s imagination, which was definitely his intention. Also serving as the scenic designer, Phillips gives himself a desk, a chair, a lamp, a radio, and a panel of lights that can be manipulated into props. At one point, he pulls aside the backdrop to reveal a chalkboard on which he draws the borders between Brazil, Colombia and Peru.

The lighting, designed by David Todaro, is truly what makes the audience feel like they’ve dropped into other countries, though. This bendable and swingable lighting panel creates a night-train thundering through the Hungarian countryside and a blue-lit bathroom in Amsterdam that The Passenger realizes is blue to prevent people from finding their veins to shoot heroin. Later, the lighting creates a palm and bamboo structure in Maloca, Brazil, which transports The Passenger deep into the jungle. The sound by Robert Kaplowitz adds to these terrain changes and even acts a joke during one particular segment where the ferry from Ancona, Italy plays “All That She Wants” by Ace of Base on repeat to Split, Croatia and back again.

Overall, 17 Border Crossings, which is directed by Tatiana Mallarino, is great at putting the viewer in the shoes of The Passenger. Most of the dialogue is done in the second person, so it feels like “you” are the one interacting with the border agents. Despite traveling through seventeen borders, the show isn’t confusing and or hard to follow. It’s engaging where such an information dump could have felt boring. There’s a lot going on and I walked out of the show knowing a little more about Jordan, Brazil and the tunnel between Gaza and Egypt.

But in the last 10 minutes or so, the show takes a wistful turn during the Mexican border crossing. A man talks to The Passenger about being deported from the U.S. and, in the following scene, a U.S. border guard in Mexico sees the man cross back over the U.S. border. And he lets him do it. In light of what is actually happening at our southern border, this left a bad taste in my mouth and was very clearly wishful thinking on Phillips’ part. The world doesn’t work that way, and we can’t will it into being gentler. It would have been better to end the show with reality.

Alicia Kort is a contributor to Exeunt Magazine