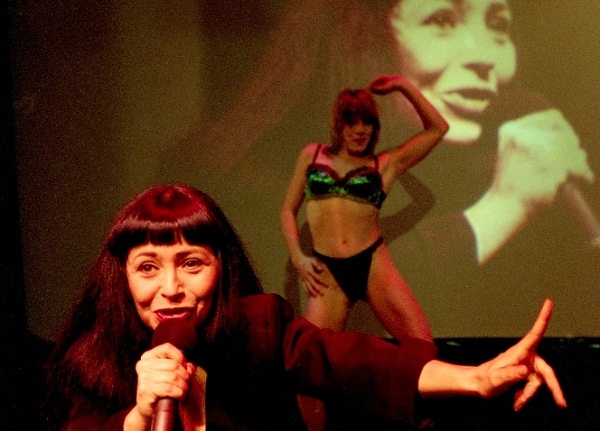 Carmel Doohan: The show didn’t really work in the way I expected it to; it seemed surprisingly dated. There were some great moments- the dancers were incredibly skilled and daring, the pole dancer’s strength was unbelievable and the sketches where Penny was in character were witty. Despite that, I found the monologues cringe-worthy, packed with a lazy pseudo-psychological generalising that gives left-wing and anarchist thinkers a bad name. Length also made it seem under-edited and rather self-indulgent.

Looking over other reviews of this show, which has been running since the early nineties, I don’t get the feeling it’s changed very much. The final controversial scene in which she gets naked and delivers a woolly political rant is shocking only through the tiredness of her observations. This was perhaps radical once but it’s certainly lost its edge in favour of prophetic speculations.

Bojana Jankovic: What’s controversial about the infamous last scene is not, I would argue, the text; it’s the fact Penny Arcade is stripping, while playing with an American flag, with a video about the obscenity laws vs the 1st amendment in the background. Is it old material? Yes – it was motivated by an amendment that aimed to forbid public money going towards ‘obscene’ projects. Is it dated? I’m not sure. In America Janet Jackson’s nipple can still cause mass outrage while corporations are, legally speaking, regarded as having the same rights as people. When simple nudity overshadows corporate obscenity a scene combining the first amendment and striptease seems adequate. If this is a debate that’s been relevant for two decades, there’s no reason Penny Arcade shouldn’t continue coming back to it. There’s also, scattered around the performance, various other evidence of political provocations: a whole monologue is devoted to an anti-PC rant, and the lesbian population is accused of not having sex until a decade ago (two name but two).

What concerns me more than the political message, is that a political message (outdated or not) does not make political theatre . If an artist only has a political agenda and nothing else perhaps it’s time to consider a career in politics; political theatre still needs to be theatre and still needs to find a way of expressing its intent in a theatrical way – and that’s what this performance might be missing. As appealing and humorous and witty as the individual monologues might be, they are presented in a manner that’s old-fashioned even in the realm of solo shows by legends (or did pretending to talk on a phone make a postmodern comeback?). The radical messages need radical form – and the show doesn’t offer much of that. At least it doesn’t anymore – when it started its very form was a response to very concrete restrictions in public funding; now that it’s proved itself to be a commercial success surely the updates need to incorporate the form as well as the content.

Carmel Doohan: Despite that, when well over half of the audience got up to dance it is really heartwarming. There is a sense of togetherness, of people really enjoying the moment and atmosphere she is creating. Her connection with the audience is powerful, but I wonder if this is simply because it’s a devout audience of followers? Penny herself states that “skepticism is a great tool. but we shouldn’t live in our skepticism” .

Assessing the show critically felt a little strange; both performer and audience appear to be getting exactly what they want and all seem very pleased with themselves. Does this mean it was successful, or good? I wonder, if you already love Penny Arcade then you’ll love this, but less so if a stage full of people singing and dancing to ‘I will survive’ doesn’t excite.

Bojana Jankovic: It’s not fair to take away from Penny Arcade the rapport she has with the audience; it’s also important not to undermine how hard she works to make her performance space a safe haven, where people share an experience and not observe it. When a tent full of people gets up to dance to I Will Survive – whether they are fans or not – it’s only because they are very much seduced into it. This might be part of the reason why the staged, ‘4th wall in place’ monologues don’t particularly work – they are clashing formally both with the rest of the performance and the performer.

It’s interesting to see such a blatant mix of fictional and autobiographical sections in a single performance, by a single performer – Penny Arcade jumps from one to another, and then back again, seemingly with no scruples at all, diving into a character and then straight back to herself. At times this completely ruins any structure the how has , but it also reinforces the show as a variete in which anything goes, as long as it’s line with the general message. Most of the time I’m not sure if this is intentional or not. Did you think the structure was lazy?

Carmel Doohan: I did, often the only thing holding it all together was her. The sense that she was winging it was sometimes charming and obviously a way to create intimacy and break down barriers with the audience, but often it felt too amatuer. She has been doing this show for nearly twenty years, filming it, editing bits, re-working it- and it feels like she has lost any sense of how it might come across to a contemporary, non-American audience, one that might not have extensive knowledge of the 1980’s gay scene in New York. Satire needs to be timely for its nuances to work, and often her references fell flat. Her comments on London and Britishness- mostly how we “Muck in” and forage for potatoes- revealed little insight.

Bojana Jankovic: It’s very likely Bitch! Dyke! Faghag! Whore! gets at least occasionally accused of preaching to the converted – even though there’s quite a lot of criticism directed straight at the LGBT community, or even the Burlesque itself (the show starts with Penny renouncing it). Maybe this is how the performance evolved in the twenty years it existed – as LGBT rights movement gained momentum – by constantly introducing new elements of the skepticism you mentioned, even towards its own?

Carmel Doohan: Her criticisms of ‘her own’ were interesting. She remarked that all gay men look the same now (and all gay women now look like young gay men) whereas ‘back in the day’ there was more style and individuality. There was a lot of back-in-the-day-ing. She continually tried to place herself outside of anything fashionable- renouncing the increasingly popular burlesque was one example, but also the damning of places like Williamsburg and Shoreditch. Her criticism of the next generation of LGBT and artists seemed an accusation of a too many people with not enough knowledge of what had come before them.

For all her open hearted pep talks, she showed bitterness about a lack of deference and was clearly upset that her time in the limelight had passed. She brought up issues such as what it really means to be radical, subversive and an ‘artist’ but there was an implication that only her own experiences could really contain something meaningful. She performed generosity but it didn’t ring true- neither to her dancers or to the audience. Over the lifespan of the show the world has changed and so has she. A climax that was once radical political commentary has become something else; ageing and vulnerable, surrounded by stunning dancers and a young audience who no longer get most of her jokes, her strip show now tells a different story.

Bojana Jankovic: You pointed out how the show might be a different affair all together for fans and novices. It’s now entering its third decade, and what strikes me as interesting is whether it’s at all possible to examine it without taking into account the ‘historical artefact’ status it has acquired. Should it be approached not only knowing but also nodding to the long and rich past life of the performance, or is that all to be cast aside? And would those to ‘methodologies’ bring us to different conclusions?

Carmel Doohan: As a stand-alone piece it was fragmented and repetitive, but you are right, it is not intended to be a stand alone piece; her cult status and the show’s history are a crucial part of the performance. Interest in her and her opinions is assumed rather than earned – but perhaps you earn the right to assume interest when performing to a crowd who have paid to see you. What would be really interesting is if she created a piece that responded to the present – a show to give her powerful history a new context rather than a show that is more and more simply cashing in on the past.

Bojana Jankovic is one half of There There, a company composed of two eastern European theatre directors who turned from theatre to performance only to repeatedly question their decision. Before shifting to collaborative projects, she worked as a director and dramaturg on both classics and contemporary texts. She also wrote for Teatron, a Belgrade theatre magazine. She has a soft spot for most things pop, is surprisingly good at maths for a thespian, and will get back to learning German any day now.

Produced by Jeremy Goldstien and Time Out Live