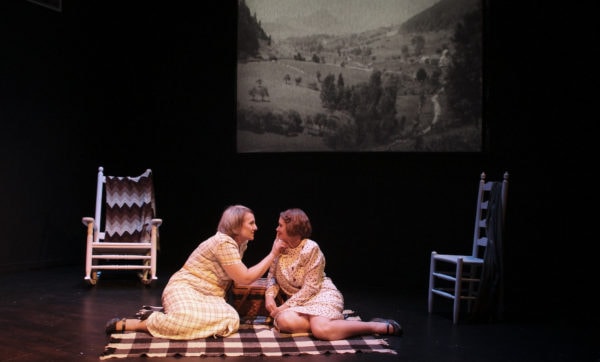 As Alice Austen surely knew, you often need to zoom in to make the best picture.

That would be some sage advice for the team behind Alice in Black and White, a play that tracks the life of the Staten Island photographer from the age of 10 to 86. Rather than discerningly selecting characters, themes and scenarios that constitute a specific narrative of the image-maker, writer Robin Rice goes for a wide, and ultimately unfocused, pastiche, putting biographical comprehensiveness ahead of dramatic power.

We first meet Austen (Jennifer Thalman Kepler) as a child. Enamored by the cumbersome wooden box she understands can “freeze time,” she resolves to “make pictures of everything in my life and put them where I can take them out and look at what’s mine anytime I want.” Over the next two hours, we encounter her at nearly every phase of her life, and meet nearly everyone in it, including her mother and grandfather, cousins, unsuccessful male suiters, friends, servants and visitors. Some of the actors play as many as four different roles, a few of them in the service of just a short scene or two.

Rice presents Austen as the renegade that she was in real life. Not merely content to break down barriers in the art world — there were few working female photographers in the late 19th century, when she took up the camera — Austen also upended social conventions. She refused to marry a man, instead taking as her companion a woman, Gertrude Tate (Laura Ellis), much to the dismay of her elders. Austen’s struggle to remain true to herself despite familial discontent serves as a through line in the play, but her adversaries are so numerous and so thinly drawn that her clashes with them lack strength.

For the most part, Austen’s life unfurls linearly and chronologically. A major exception comes in the form of a parallel narrative taking place in 1951, in which we meet Oliver Jensen (Joseph Hatfield), the publisher who helped pluck Austen out of obscurity when, while researching a book on American women, he uncovered her forgotten work in the collection of the Staten Island Historical Society. (Historically, it was actually a researcher, investigating on Jensen’s behalf, who first found the boxes, but no matter.)

Over a series of awkward scenes interspersed throughout the show, Jensen pesters an uptight receptionist, Sally Lally (Trina Fischer) into letting him see the glassplate negatives he’s seeking — a device that’s as unnecessary as it is historically inaccurate. In the process, he also kind of flirts with her, and their romance is about as steamy as you might imagine taking place in a historical society building. Jensen and Austen, meanwhile, also carry on a mystical relationship that plays out in a kind of fantastical non-space. It’s just as confounding.

Amongst all this activity, it’s unfortunate that Rice glosses over the most fascinating aspect of Austen’s career: Her documentation of everyday New York life that fell outside her own direct experience. While Austen’s images of her upper middle class Staten Island social circle are well discussed and dramatized here, we see or hear little about the photos of New York street life that really set her apart. When we do, it’s in an abbreviated montage of sorts, as Jensen and Lally finally pour through her negatives.

“Beyond amazing,” Jensen says, holding one plate to the light. And indeed, her work was quite special, but audiences here might be forgiven if they don’t come away knowing exactly why.

Jordan G. Teicher is a contributor to Exeunt Magazine